When I started dating Z, one of the things I liked best was how little he hedged. At first, it took me aback: if he didn’t like someone, he’d simply say: “I don’t like that guy.” or: “He’s a jerk.” So straightforward! There was no qualifying, no dancing around: “Well, you know, he’s probably a nice guy at home, but sometimes at work, he takes credit for things I do and it annoys me.”

As someone who dances a fair amount, I found this so refreshing. It felt straightforward: here I am, adrift in a sea of grey, and then there’s Z with his black and white language. I liked the black and white: it felt solid, decisive. (Of course, the flip side is that we’ll occasionally have hushed conversations where I say: “More gently!”) 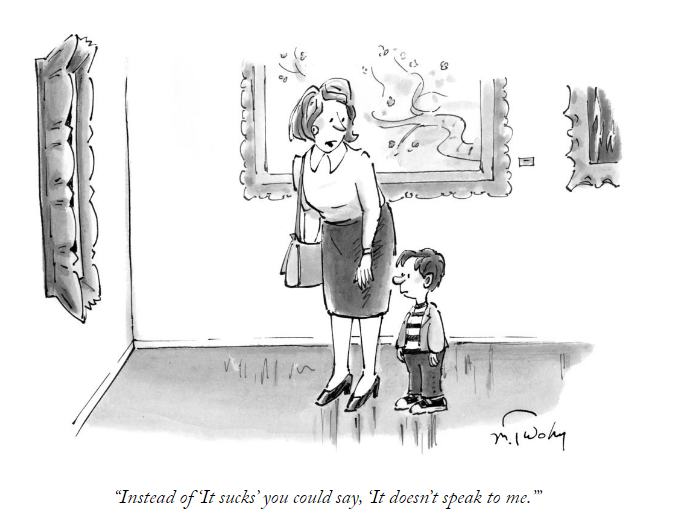 In highschool, I wrote a few competitive examinations. To prepare for one, we reviewed previous exams, particularly the essays that had received the best grades. Almost all of them used an authoritative voice, which is to say there was little first person, and almost no qualifying or hesitant language. So:

“I feel Johnny is sometimes abrasive.” would lose.

“John is sometimes kind of abrasive.” would rank better, but not well.

“John is abrasive when he does x.” would win.

“Authoritative” does not mean “generalize” – you still need to be specific with your arguments, and to give examples. When we reviewed, it was clear:  the authoritative voice was the quickest, cleanest way to get information to the reader.

Later, I was trained that “I feel” or “I think” is redundant: obviously, any piece of writing is from the point of view of the writer. As a reader, one should always assume the author has a point of view – this is the crux of thinking critically. Ergo, when you use a lot of qualifying language or first person, you not only are detracting from your key points, you’re also assuming a lack of critical thinking skills in your reader.

But you’ll see it everywhere, in writing: “that time made me think of”, or “I feel like”, or “honestly, I don’t know if it’s just me, but”… Everywhere. It’s hesitant, but conversational, casual.

I myself often struggle to write authoritatively.

I struggle despite remembering my English teacher’s comment: “The authoritative voice is considered masculine. Girls are often socialized to use more qualifying language, so you may struggle to write this way – you may want to add more qualifying language. I encourage you to resist that urge. Remember your essay will be in a stack with other essays, and the markers will not know if you are male or female.”

When I went to write the exam, I imagined myself in sitting at one of those giant oak desks wearing a suit. “If I were this person, how would I talk?” Sure enough, my essay received the highest mark possible.

But life isn’t a blind exam, alas. And obviously, when speaking or in person, there’s a different code. Years ago, a friend mentioned the group dynamics of one of her seminars. A woman in the class was considered abrasive. My friend: “I like her, so I don’t understand – I think it’s because she uses no qualifying language. She doesn’t say: ‘I think’ or ‘I feel’, she just says what she thinks.”

Disheartening, right? That some woman’s views would be discounted because of how she presented them?

Yet, we’ll see judgments about this all the time – to use language to seem “nice” vs. to seem “professional” – and it’s usually couched as career advice. Eg. “Don’t say ‘sorry’“, “Don’t say ‘just’“, “Talk like this, not like that“. It’s often at a nitpicky level, and it seems targeted more to women than men, in an effort to stop them from – this is laughable – “self-sabotaging” in the workplace. (This goop article is a PRIME example – I’m linking to it again.)

I’ve spent years trying to exclude certain phrases from my work emails, or to try to make them shorter or longer or friendlier. And some of it, sure, is about getting along with my colleagues and being a pleasant person to work with – I mean, no one should be oblivious.

But sometimes, I want to yell at these writers with their “advice”: “Enough, that’s enough! Find a real story, stop picking on people who have used the phrase ‘I dunno’ or ‘sorry’ at work. Christ.”

I’m not alone in this.

Recently, I’ve learned, my English teacher (and many others like her) was wrong in one key regard. Many men use qualifying language too. To quote Ann Friedman:

Men also use the word just. Men engage in upspeak. Men have vocal fry. Men pepper their sentences with unnecessary “likes” and “sorrys.” I haven’t read any articles encouraging them to change this behavior. The supposed distinctions between men’s and women’s ways of talking are, often, not that distinct. “Forty years after Lakoff’s groundbreaking work, we’ve learned that all such generalizations are over-generalizations: none of them are true for every woman in every context (or even most women in most contexts),” writes feminist linguist and blogger Debbie Cameron. “We’ve also learned that some of the most enduring beliefs about the way women talk are not just over-generalizations, they are — to put it bluntly — lies.”

So yes, while writing an essay for a competition in a certain style will be marked higher, it’s not just girls who are socialized to use qualifying language. Some boys are, and some girls aren’t. While we think of one style of language as being more “masculine”, and one style as more “feminine”, that’s not actually true.

I’m going to take these next paragraphs from the same Ann Friedman piece I quoted above, because I don’t think I can write them any better:

Indeed, as with salary negotiations in which women are damned if they don’t ask for a raise and penalized for being overly aggressive if they do, tweaking speech to be more direct and less deferential comes with its own consequences. “When women talk in ways that are common among women, and are seen as ineffective or underestimated, they’re told it’s their fault for talking that way,” the linguist Deborah Tannen, who’s written several best-selling books about gender and language, told me. “But if they talk in ways that are associated with authority, and are seen as too aggressive, then that, too, is their fault when people react negatively.” Asking women to modify their speech is just another way we are asked to internalize and compensate for sexist bias in the world. We can’t win by eliminating just from our emails and like from our conversations.

Lakoff argues that the very things career coaches advise women to cut out of their speech are actually signs of highly evolved communication. When we use words like so, I guess, like, actually, and I mean, we are sending signals to the listener to help them figure out what’s new, what’s important, or what’s funny. We’re connecting with them. “Rather than being weakeners or signs of fuzziness of mind, as is often said, they create cohesion and coherence between what speaker and hearer together need to accomplish — understanding and sharing,” Lakoff says. “This is the major job of an articulate social species. If women use these forms more, it is because we are better at being human.”

Language is not always about making an argument or conveying information in the cleanest, simplest way possible. It’s often about building relationships. It’s about making yourself understood and trying to understand someone else. As anyone who’s ever shared an inside joke knows, it’s fun. This can be true even at work or in public — places where women are most likely to be dismissed because of the way they speak. To assume that our verbal tics are always negative is to assume that the goal of all speech is the same. Which of course is patently ridiculous.

(While we’re on it, there’s also a lot of criticism about voices too. This essay was excellent, and the writer thinks as I do about critics of “vocal fry” and “uptick”.)